Louisiana Conference of the AAUP

The Academic Freedom Fund of the AAUP Foundation has funded us in the amount of $2057 to cover the costs to the Conference of the Christopher Newfield visit. We therefore decided to fund not one but two members of the Conference to attend the summer Institute this year. Details are forthcoming still, as the location of the Institute has not yet been revealed; information on the 2018 Institute is at https://www.aaup.org/event/2018-summer-institute.

LSU-Alexandria has formed an AAUP chapter, that currently stands at 13 members. Bernard Gallagher (Professor of English) is President. We congratulate him, the officers, and the members, and look forward to working with them. UL Lafayette’s chapter has a new President, Sun-A Lee (Associate Professor of Child and Family Studies).

We spent considerable time discussing formulation of our AAUP-ALFS resolution (directed to the Legislature but also the general public) on the restoration of state funding of higher education for the public good. Additional work on the text will take place by e-mail, so that we can present a final draft at the April meeting.

Discussion of the March ASC meeting and National Council meeting, of Committee A liaisons at institutions without chapters, and of 2019-2020 speakers and events was deferred to April.

March 2: Leslie Bary and Brooks Ellwood will attend the Assembly of State Conferences meeting in Atlanta, and will report back to this body.

We will next meet in Alexandria in April, on a Saturday yet to be determined. We will be in touch in the meantime.

Louisiana Conference of the AAUP

The President’s Report included a discussion of donations and finances; the AAUP Summer Institute; the website of the Louisiana Conference; a report/discussion on the visit of Christopher Newfield; a discussion of updated plans for speakers; and the suggestion to designate liaisons to the state conference Committee A at campuses without chapters.

Following consultation with Monica Owens, Political Organizer for AAUP National, it was decided to draft a resolution both ALFS (Association of Louisiana Faculty Senates) and AAUP as well as other entities could support, that could be used to organize for AAUP and also to work toward changing the conversation on higher education in Louisiana. We decided the issue should be restoration of state funding of higher education for the public good. Work on wording will take place at the February 2 meeting.

We will meet at LSU-Alexandria Saturday, February 2. On the agenda is:

– the new districts, are they drawn well, or would you suggest adjustments?
– delegate voting and its implications; are there alternatives?
– the new “national” chapter (for members without chapters) – how will it interface with the state conferences, in activities such as voting for national council, Committee A work, etc.?

Congratulations are extended to Xavier University members, who formed an AAUP chapter in Fall, 2018, and to the LSU-Alexandria membership who will be doing the same this spring. Organizing takes work and we are grateful to our colleagues on both campuses. We are pleased as well to be in closer touch with our colleagues at Tulane who are doing good work at both the uptown and downtown campuses.

Leslie Bary and Brooks Ellwood will attend the Assembly of State Conferences meeting in Atlanta March 2, and will report back to this body. Along with Linda Carroll, they will attend the National Council meeting in late March. Both of these meetings are on changes in the AAUP governance structure, and will have implications for us.

We have applied to the Academic Freedom Fund of the AAUP Foundation for monies to cover some of the costs to the Conference of the Christopher Newfield visit.

We will be sending a representative to the AAUP Summer Institute in 2019 (Leslie Bary attended in 2015 and Brian Salvatore in 2018); it should be someone who has not attended before. Discussion will begin as soon as we have news of the location and dates of this summer’s Institute.

The state conference Committee A was consulted on tenure and academic freedom issues by two tenured and one tenure-track faculty member at Louisiana universities in 2018. The national Committee A gave assistance on one of these cases and on another case in the Community College system.

We look forward to seeing you February 2. 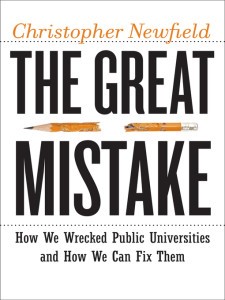 For much of the twentieth century in the United States a college education provided a path to middle-class status, and formed productive citizens. Can it still? What can we do to help ensure access to colleges and universities? Also, what do colleges and universities do for people who are not students? How can our increasingly privatized institutions continue to serve the public at large?
Dr. Christopher Newfield, Professor of English at the University of California-Santa Barbara and author of The great mistake: how we wrecked public universities, and how to fix them (Johns Hopkins University Press, 2016) will speak at UL Lafayette Thursday, October 25 on “Fixing the great mistake: American universities in 2050.” The lecture, free and open to everyone, is at 5:30 PM in 112 Olivier Hall. The funding crisis and the role of the university in society are key topics. Students, parents, administrators, staff, faculty in all fields, and anyone concerned about rising tuition, debt, and the public role of universities are warmly invited.

Dr. Newfield will also speak at LSU, Baton Rouge, Friday, October 26, at the Paul M. Hébert Law Center, 3:30 to 5:30 PM, Room 110. The lecture, free and open to everyone. Both events are sponsored by the Louisiana Conference of the American Association of University Professors.

Newfield’s earlier books include The Emerson effect: individualism and submission in America (Chicago, 1996), Ivy and industry: business and the making of the American university, 1880-1980 (Duke, 2003), and Unmaking the public university: the forty year assault on the middle class (Harvard, 2008). His writing engages American political psychology, race relations, and the power of humanities-based research. In addition to more traditional material in English, his teaching includes courses on innovation studies, global California, the future of higher education, and English majoring after college. He blogs on higher education funding and policy at Remaking the University, the Huffington Post, and the Chronicle of Higher Education. His current book project is Lowered education: what to do about our downsized future. The lecture at UL Lafayette is based on research for this book.

Dr. Newfield’s The great mistake was published in 2016 and has just come out in paperback. The book addresses the crisis in U.S. higher education, as college becomes more and more of a necessity while tuition rises, and students and families suffer from unprecedented debt. How did this happen, and what can we do about it? What impacts does this situation have on society at large? Newfield combines firsthand experience with expert analysis to show how business-minded practices have increased costs and reduced the university’s value to society. He argues that higher education is a public good and must be treated as such.